The Rick Hinderer Half Track Gen 2 is a robustly constructed, compact pocket knife. You don't often come across a pocket knife with this size that will immediately make you feel as if it is built to handle the more demanding tasks. The Halftrack gives you the confidence of a large work knife, in a smaller jacket.

Rick Hinderer told us that he designed this knife to be as solid as a brick shithouse. He did so by making the handle remarkably thick. As such the Halftrack completely fills your hand. The CPM 35CV steel blade is, with a blade thickness of 4.1 mm, also relatively thick.

But not only the thickness and the size of the materials determine the strength of the folding knife. The stop-pin and the lock are just as important. While with most pocket knives the blade opens against a stop-pin in the handle, Hinderer turned this around. He pressed the stop-pin into the blade. This pin leans against a cut-out in the titanium handle. As such the blade is supported on two sides which leaves you with even more stability because the load on the blade is distributed better.

The Half Track opens quickly with the flipper. The blade runs on teflon washers. The big advantage of this is that they run very smoothly even without oil. In addition, with Teflon washers you won't be bothered by dirt as much as with ball bearings.

The Rick Hinderer Half Track might be the smallest pocket knife from the Hinderer collection, it is definitely not one to underestimate. You notice that Hinderer pulled out all the stops to make this knife technically perfect. 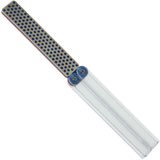 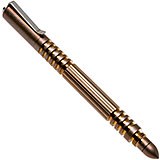 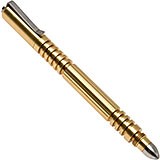 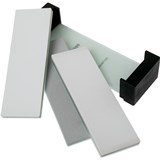 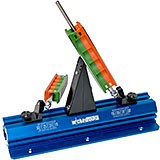