Leatherman Surge vs Wave Plus

The Leatherman Surge and Wave Plus are both popular multi-tools. However, what are the differences between the two? What are the advantages of both tools? And why would you choose one over the other? We will explain.

Which tools do these multi-tools have?

A comparison between two multi-tools is not complete without an overview of the different tools. That is why we made a list of all tools. What is important to know here is that some tools might have the same function, but that the tools can still be very different. The pair of scissors on the Surger, for instance, is twice as big as that on the Wave+, and the saw and file of the Wave+ are completely different from those on the Surge.

SDS-replacement holder on the Leatherman Surge

As you can see in the table there are some tools the Surge does have that the Wave doesn't. Makes sense considering the difference in size. However, the differences in tools aren't that big. One important tool you can only find on the Surge is one we would love to highlight. We are talking about the SDS-replacement holder.

The saw/file is accessible from the outside of the Leatherman Surge. Now I can hear you think: a saw and a file are completely different right? Very true. However, with the Leatherman Surge they fit on the same tool. It is enhanced with an SDS-replacement holder. In this holder you secure the saw or file, whichever suits your purpose. The Leatherman Surge comes with a small bag with these two tools. The main advantage is that when the file or saw are blunt you can simply purchase a new set. This tells you that the Leatherman Surge is perhaps a little more suited for professional or heavy use.

The mount of the saw and file are similar to the holder you use to secure the saw. These saws also have an SDS-mount.

Tools that are accessible from the outside

One of the most important features both multi-tools have in common is that they are enhanced with tools you can open without having to open the entire tool. The tools that can, however, differ per multi-tool. Here are the differences:

You can tell that the Surge has a slight advantage because of the SDS-replacement holder. As such you can always keep the saw or file at the ready, and you will have one place left that is taken over by the larger scissors. Do you use the scissors often? If so that could be a reason to choose the Surge. At the same time this also means that on the Surge you need to choose between the file and the saw. Do you use both often? If so it is more practical to choose the Wave+.

In the tool overview you can already see small differences between the screwdrivers of both multi-tools. Most used screwdrivers have one thing in common: the large bit holder. It has room for Leatherman's flat bits, which, in combination with the individually sold Bit Kit, leaves you with a gigantic amount of different screwdrivers.

From here the tools differ a little. The Leatherman Wave Plus, for instance, also has a small bit holder. It has room for a small flat head and philips head screwdriver. Small as in, a screwdriver for glasses. Also great for electronics. On the Surge this holder is missing, but instead a smaller flat screwdriver was added. Even though this isn't as compact as the screwdriver of the Wave+.

The Leatherman Surge has also been enhanced with a large flat head screwdriver. It is 8 mm wide and the end is 1.1 mm thick. So a real big one. The Wave Plus has a medium 7 mm wide screwdriver with an end that is 1 mm thick

Both multi-tools are very versatile and enhanced with a lot of the same tools. Compact toolboxes, each with their own unique features. If you ask us the size is the most important reason to choose either one. The large Surge is great for large hands or heavy use. The Wave Plus is more compact and therefore great for everyday carry or a place in your glove compartment or backpack. 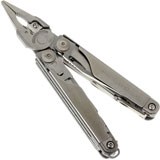 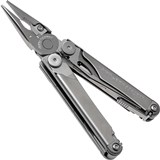 What is the best multitool?
How do you maintain a multi tool?
Top 10 best-selling multi-tools of 2018
Leatherman Free: newest multi-tools for 2019