The Fenix HL40R blue is a rechargeable LED head torch and a true all-rounder. The compact size and the seven light modes make this light the perfect companion during camping and hiking trips and mountain climbing adventures. With the two switches on top of the head torch you can choose between the different types of beams.

At least seven modes, a maximum of 600 lumens and a maximum runtime of 200 hours are what characterize this head torch. You can also lock the light when you don’t need it. As such the light won’t be turned on when you don’t want it to. Say goodbye to drained batteries. In addition, the Fenix HL40R is dust and waterproof up to a IPX-6 norm.

The Fenix HL40R derives its strength from the built-in 2000mAh Li-Po battery you can recharge with the micro-USB port at the back of the light. With a full battery the light will (depending on the light mode) function up to 200 hours. The torch comes with a micro-USB cable. A row of four blue LED lights dives you the actual battery status.

Despite the built-in battery this head torch doesn’t weigh that much. With only 112 grams (including headband) it is definitely a light-weight torch. Especially when you consider the light output and burning time. 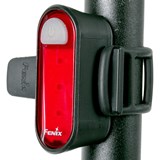 Combi deal
1 review(s)
Fenix ALD-02 Helmet mounting clips for headlamps Clips that will enable you to attach your headlamp to a building or climbing helmet
£ 5,36 £ 5,95
10% off 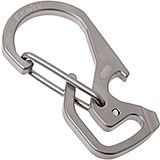