The Fenix HM65R is the most powerful head torch from the Fenix HM-collection. Because of the double light source you can choose between a broad beam and a focus beam. As such you can light up, up to 163 meters in front of you. Turn both light sources on at once and enjoy a very powerful 1400 lumen light. Combined with a weight of 97 grams and a burn time of up to 300 hours this head torch is perfect for challenging outdoor sports. Think of expeditions in the snow, trail running, but also climbing and cycling trips.

How to use the Fenix HM65R

You can control both light beams with the two separate switches. Both switches were designed as such that you can also easily use them while wearing gloves. One switch controls the broad beam, the other the focused beam. By holding one of the switches down you turn on the light. The light will immediately start in the mode last used. To switch beams or modes you briefly press the preferred switch.

Focused beams on the Fenix HM65R

You don't want the light to accidentally turn on during transport. To ensure it doesn't you can use the lock-out mode. To activate this mode the head torch needs to be turned on. Afterwards you press both switches at the same time. The light will confirm the mode by blinking four times. The head torch won't turn on now. To deactivate this mode you press both switches again. The light will start in the lowest light mode of the broad beam.

By tilting the light you can find the USC-C port. A rubber cover ensures that the head is protected against water and dust. A such the USB-port also cannot be damaged. Want to check the battery status while charging the light? A blue charging indicator will show you the charging status. It will take up to 2 hours to charge the battery. As soon as it is fully charged the indicator will turn blue.

The Fenix Hm65R comes with a 18650 Li-Ion battery. But you can also use it with two Cr123A batteries. The battery indictor does not only work as you charge the light. As soon as the light is turned off, the blue indicator will give you the current battery voltage. As such you can quickly see the battery voltage.

Accessories for the Fenix HM65R

Do you want to safely store the head torch? Order the Fenix APB-20 storage bag. As such you will enjoy your head torch even longer. 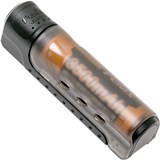 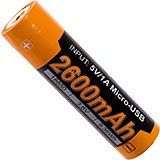 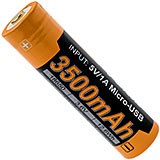