The Fällkniven S1xb is a top-quality outdoor knife, suited for many different users. Bushcraft and survival enthusiasts, hunters and other outdoor enthusiasts have known for years that Fällkniven produces amazing knives This S1xb is a full-tang version of their Fällkniven S1.

The Fällkniven S1x is also called the 'Forest Knife'. It was originally designed as a knife for outdoor enthusiasts who spend a lot of time in the woods. Its blade length is slightly bigger than the F1x, but not as massive as the A1x. And yet it is still quite heavy for light pruning tasks.

The Fällkniven X collection is the first of this Swedish brand with a full-tang construction. This means that the tang of the blade runs throughout the entire handle. This is stronger dan other construction methods. The scales are mounted to both sides of the tang. These are still made from Thermorun. This is an elastic plastic that absorbs blows and offers a lot of grip. These scales even offer more grip than the handle of the normal S1.

The blade of this B-version is black. And not because a simple coating: Fällkniven added a special tungsten carbide coating. With a hardness of 83HRC it is even harder than the blade itself! A couple tests with hard blocks of wood carried out by Fällkniven demonstrated that this coating is wear and tear resistant. It also looks very cool! You cannot see it clearly in photographs, but the coating is enhanced with remarkable greyish glow. Stunning.

The Fällkniven S1xb comes with a Zytel sheath. Fällkniven upgraded this as well by adding an additional retention lever. With it you can secure the knife in the sheath. As such it won't rattle, and you won't lose it. A nice upgrade! 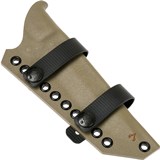 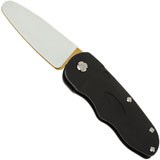 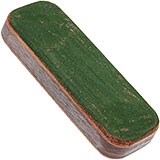